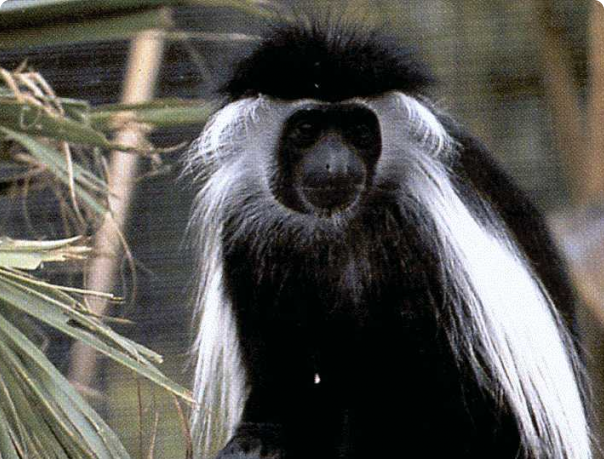 The Angola colobus has black fur and a black face, surrounded by long, white locks of hair. It also has a mantle of white hair on the shoulders. The long, thin tail can be either black or white, but the tip is always white. There is a significant regional variation in the total amount of white on the body and the length of the fur. Animals that live in the mountains have longer, thicker fur than animals from the lowlands to protect them against the cold.

The Angola colobus has a head-body length of 50 to 70 cm, with the males usually being larger than females. The tail is about 75 cm long, and the body weight varies between 9 and 20 kg.

Angola colobuses are found in most of the Congo Basin, to the south and northeast of the Congo River, as far as Ruwenzori, Burundi and southwestern Uganda. The species can also be found in East Africa, especially in Kenya and Tanzania and in isolated mountain areas. Although the species is named after Angola, it is quite rare in that country.

Angola colobuses are diurnal and arboreal creatures. They may sometimes come to the ground especially near streams to eat vegetation but prefer to stay higher in the canopy. Angola colobuses live in troops consisting of up to 25 individuals but may also gather in groups of over 300 animals. A typical group includes one adult male and 2-6 females with infants. Young males leave the group before they reach maturity or they can challenge the dominant male for control of the females. When a troop is threatened by a predator, the male will jump and roar until the rest members of the troop run away.

Angola colobuses are polygynous. This means that males mate with more than one female during the breeding season. Females give birth to a single infant after the gestation period that lasts around 147-178 days. Infants are born all white and begin to change color at around 3 months old. The mother and the other members of the group care about the young. The infant is weaned when he is around 15 months old. Males in this species become reproductively mature at four years of age while females attain maturity at two years of age.

In the wild, Angolan colobus monkeys live about 20 years, though lifespans of up to 30 years in captivity are not uncommon.

A spacious aviary is required for keeping colobuses. It is desirable to keep a group of animals in one enclosure. Usually it is 1 male and 3-4 females. The enclosure must be equipped with branches and ropes for climbing. In the upper part, you need to install a shelf for sleeping.

Young branches of trees with leaves and buds, as well as fruits and vegetables are the main part of the diet.